skip to main | skip to sidebar

The lab submitted a mini-EU proposal named SENse based SAFEty in Human-Robot Interaction to EU-ECHORD.
The project is about how to prevent the robot's attack and protect the human worker when working together the mobile robots.
Summary of this proposal can be seen as follows:
"A challenge of applying robots to our daily life is safety: how to ensure that robots will in cooperation reliably assist human, not harm them instead. This subject has intensively received the attention from the dawn of robotics industry: “a robot may not injure a human being or, through inaction, allow a human being to come to harm”- Issac Asimov – 1942. Because of imperative impact of robots to human safety, there exist standard for robot development and human safety issued by either standard organizations, i.e., American National Standard Institute (ANSI), U.S Occupational Safety and Heath Administration (OSHA), Canadian standard organization (CAN), International Standard Organization (OSI), etc or robot manufacturers, i.e., ABB, KUKA, Ries, etc. While all standards mainly concerns the safety aspects of industrial robots, the robotic industry has been rapidly grown with appearances of new generations of robots as professional service robots and personal service robots that assist human through direct or indirect interaction in the human-life workspace, establishing a new robotic subject, human-robot interaction/cooperation. This requires that the standards could be revised and improved to meet the on-going development of new robots as stated in the second part of evolving ISO10218.
In SENSAFE we suppose that human and service robots share the workspace, and implicitly or explicitly cooperate to finish assigned tasks. Risks of human in the workspace essentially come from the attack of robots caused by its functioning failures. The reasoning of robot’s failures can be either control system unreliability or misunderstanding human’s commands. However, based on the general close-loop-model of robotic systems, “sense-think-act”, “sense” is the first component that plays a role as perceptual, representational, or reasoning input to the sequence “think-act”, hence it essentially becomes the reason causing the malfunction of the robots due to uncertain conditions of the working environment and unpredictable actions of human co-workers.
The SENSAFE project aims to research and develop a new experiment-based knowledge (empirical knowledge) on how to determine modes of operation and control of robots according to safeguarding and clearance between the robots and human in the human-life workspace based on the robot’s “sense”. The objective of SENSAFE is to develop experiments for assessing safety levels of human co-working in the shared workspace. The research of this project is to contribute to: 1) society in terms of deeper understanding of human risks in the manner of human protection and injury minimisation when sharing workspace with service robots; 2) industry in terms of technological standards for development of service robots working in human shared workspace; 3) science in terms of techniques and algorithms for safe human-robot interaction/cooperation"
Posted by morelab at 02:17 1 comments 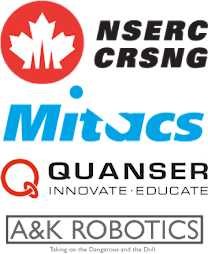